Panciteria Toho Antigua (now known as the New Toho Food Center) is incomplete when you wish to have a food tour in the world's oldest and one of the largest Chinatown in the world.

The panciteria (noodle house)was founded by Manuel “Po Kong” Bautista and his 4 Chinese friends decided to set up a place to dine-in 1888. Some culinary historians are telling that it might have opened earlier around 1866 ( citation needed).

After several years, the four other business partners/ friends went back to mainland China and the business was left to "Tai Ping". Eventually, the establishment was handled by his 7 children. Now, the business is being run by third generation descendants Mr. Alger Wong and Ms. Kathleen Wong.

Toho dishes reflect the rich diversity of Spanish,Filipino-Chinese ways of cooking and the name of the dishes.

Morisqueta Tostada or Yang Chow Fried Rice ala Toho is one of the famed fried rice dish that one must try when you dined at this place. This had a generous mix of peas, chicken egg, ground pork meat and shrimps. Large serving is good for sharing between 4 to 6 people.

Some say that it was in this restaurant that this spring roll was popularized and indigenized into the Filipino-Chinese cuisine. 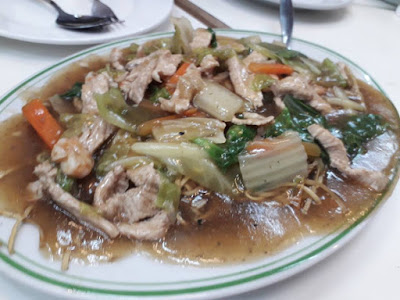 Pancit Guisado ala Toho - The noodles were stir-fried giving it some crunch not too soggy and the noodles have thick sauce base.

The remarkable thing about the sauce is that despite the various meat parts, vegetables like Napa cabbage, pechay and carrots that are spread all over. The pork cutlets,pork liver, shrimp perfectly complemented the sauce. Some people who may want a more personalized experience can find it in New Toho as they are flexible when it comes to choosing toppings or change some of the topping ( like those allergic to shrimps or dislike liver).

Pork Asado/ Liempo is one of the iconic dish served at this restaurant. The pork had been smoked for a long time with additional Chinese five spice flavorings that enhances its taste. Whenever there are big holidays like Christmas, All Saint's Day,Chinese New Year or Chinese Ghost Month. Customer would pre-order this as they are offered as "alay" or offerings to the ancestors or deities.

Sometimes, this popular dish would be sold-out in just matter of few hours. we tend to pre-order at least a day or so during these season.

The restaurant got its name from Chinese- Hookien word " To- Ho" meaning good enough while the word "Antigua" from Spanish word "Ancient" which the owner wanted its patrons to remember things whose qualities have proven their value for over long period of time, which can last for eternity.


Panciteria To Ho Antigua eventually reign supreme at Calle San Jacinto (now Tomas Pinpin street). The panciteria is near Calle Escolta,Calle Dasmariñas, Plaza Santa Cruz and within Binondo district which were considered as financial district during Spanish, American, Japanese occupation and up to the early republic era.

This was also featured in Jose Rizal’s “Noli Me Tangere”. The restaurant still exists over a hundred years after Rizal wrote the novel.

Old timers would sometimes refer this as Antigua Toho.Distant relatives also recalls that, The place was a hangout place for many well-known Filipino-Chinese newspaper writers (1950's to mid- 1970's),who would try to get some insider scoop with the latest ( gossip / tsismis) among the community.

When Panciteria San Jacinto opened just few meters away in 1894. This created some friendly rivalry between both restaurants. ( somewhat like Jollibee and Mcdonald type of rivalries today). Distant relatives who reside few blocks away, (old timers in Binondo) told us that some of the cooks and kitchen staffs were lured into working at the restaurant came from Toho. The old panciteria also burned down in 1984.

Mr. Benjamin Leung proprietor of Wah Sun / Sun Wah used to worked as a waiter at Panciteria Toho Antigua before opening his own restaurant in Santa Cruz in the mid- 1950's. Mr. Leung acquired some cooking techniques, recipes,management style of his own.

Camaron Rebosado/ Battered Shrimp - Deep fried shrimp coated in simple batter is another perfect dish. Simple and tasty.
Pinsec Frito -This is a good appetizer dish while waiting for the main course. The wanton wrapper had some ground pork filling then deep fried in hot oil.

Second Floor
The second floor is good venue place for family gatherings,weddings, debuts, product launching and can accommodate between 80 to 120 sit-in guests. There is a separate restrooms the second floor and an air-conditioned place.

During the restaurant heydays,whenever there were championship meet of BAA and Manila Industrial and Commercial Athletic Association ( MICAA). San Miguel Beermen under coach Ignacio" Ning" Ramos and the Utex Wranglers together with their supporters celebrated their court victories by dining at this place.

Same story with athletes from NCCA,UAAP, Toyota and Crispa players would be spotted dining at the restaurant.

The wooden restaurant had suffered another set back in 1984,when fire destroyed almost all the memorabilias leaving only few photos and an old cash register.

It was eventually rebuilt along, hence having posted “new” in New Toho Food Center. Most of the chairs,tables and fixtures would be in this time period. One could not physically see the authentic 19th century ambiance,except for the popular dishes that people would cherish.

This restaurant is also listed under popular restaurant app Zomatoph and Tripadvisor.